Can Women Pitch As Well As Men?

It’s a simple fact that most successful startups are run by men. Why? Firstly, there are more men than women who decide - or dare - to start companies. Secondly, men are more successful at raising funds than women, and even those women who do raise funds end up raising less, on average, than their male counterparts. Having spent two years playing in the Silicon Valley arena myself, I’ve seen this truth first hand both in California and now in France. It’s a sad state of affairs, and it needs to change.

Events like Be a boss, happening this September 21st in Paris, aim to encourage women to start and run their own companies, and help them to succeed. At Ideas on Stage, we care deeply about redressing the gender balance, ensuring women have every opportunity to build their careers, and helping them to make and take these opportunities with both hands.

So, we’re very happy that for the third year running, Phil Waknell, our Chief Inspiration Officer at Ideas on Stage, has been invited to deliver two keynotes at Be a boss, aiming to inspire the many female entrepreneurs to pitch themselves and their companies brilliantly, and help them to raise funds and attract clients. Given his experience helping literally hundreds of start-ups prepare and deliver powerful pitches that win contests and raise millions, I asked Phil about his thoughts on the matter. 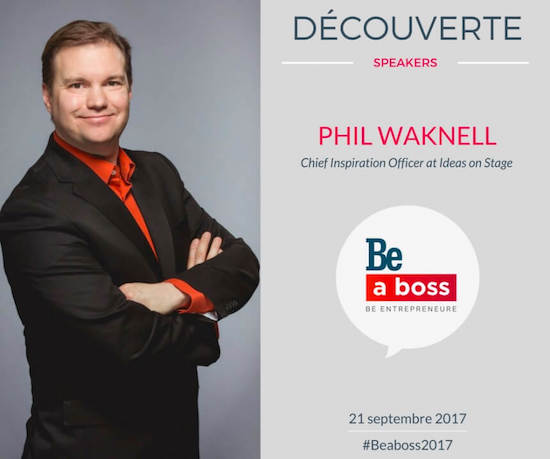 “Many of the best pitchers I’ve seen are women,” says Phil, who believes that in fact women have many advantages over men when it comes to pitching. “I find women generally spend more time preparing and thinking about what their audience needs, and more time rehearsing, whereas too many men have a tendency to ‘wing it’ and lean on their skills and charisma. That puts women at a great advantage, because preparation is the most important key to pitch success”.

So why do women raise funds less often than men? “Partly it’s because the investment community is still very male-dominated,” explains Phil, “and consciously or subconsciously that leads them to invest more easily in men. Plus, it’s a unfortunate fact of life that any minority needs to reach higher standards just to get an even chance, and among startup entrepreneurs women are still a very small minority. This is changing but there’s a long way to go, so women need to pitch at least as well as men, and ideally even better.”

So why is it that those women who make it over this barrier and convince investors still end up raising lower amounts than men? “I’ve heard this explained simply: women ask for less capital. Is this because of lower ambitions, lower expectations or lower self-confidence? I think they all play a part.”

That said, what does this mean for women looking to raise funds? “Like so much in life, it comes down to skills and attitude,” says Phil. “Learning how to create and deliver a fantastic pitch is vital for any entrepreneur, and building those skills will help women to build their self-confidence. As long as your startup is worth investing in and your business plan is credible, a powerful pitch delivered with a confident, positive attitude and a strong ambition will hook investors. And I truly believe that with this kind of pitch and attitude, a woman has a better chance of standing out than a man.”

To see Phil’s keynote and many other great speakers, sign up for Be a boss here - note that the event will be in French.

If you can’t make it to Be a boss, or you don’t speak French, why not sign up for our women-only course Women on Stage, led by Marion Chapsal, one of Europe’s leading specialists in gender-balanced leadership and coach to many top female executives. She is also leading a power-packed women’s retreat and training, The Heroine’s Journey, this September 29-October 1 in beautiful British Columbia to empower women to find their voice and take the stage.

Be a boss 2017 - links and information Event program: http://www.be-a-boss.com/programme-complet

Registration for Be a boss: http://www.be-a-boss.com/inscriptions

Prior to founding Ideas on Stage in 2010, Phil was manager at Procter & Gamble and commercial director at Hewlett-Packard. Today, apart from his many creative assignments with large corporate clients, Phil teaches at HEC Paris, and regularly speaks in public about the need to communicate differently. As a ‘pitch doctor’ for NUMA, Microsoft Ventures and France Digitale, Phil has helped hundreds of start-ups prepare and deliver a powerful and memorable pitch, win contests and raise millions.